Time flies when you’re having fun — it’s almost time for the close of Season 2 of Inside Horror. On our penultimate episode, we featured special guest Ti West, the director of The Innkeepers. The Innkeepers was one of Elric Kane’s favorite films of the year (I rather liked it, too — check out some of the interviews, and the review, I did for Horror.com a few months back).

But before we got to talk with Ti, FANGORIA’s Rebekah McKendry filled us up with the Fango Feed, imparting the latest news (Ray Bradbury passed away; Rob Zombie’s reason for not having The Lords of Salem done yet; and updates of the latest horror-themed TV series, Hannibal and Mockingbird Lane), and giving a little tease on the next Fangoria free screening in L.A. (Monday June 18, at the ArcLight Hollywood). Check Fangoria.com or the Inside Horror Facebook page for more details.

We then discussed our favorite ghost movies, but Elric made it that much more difficult by taking The Shining out of the equation. So, after The Shining, was else is there? Well, plenty! Me, I went with the oddball choices of screwball comedies of the 1930s (Topper, Blythe Spirit), a sweeping romantic weepie (The Ghost & Mrs. Muir, starring the luminous Gene Tierney and the gentleman rogue Rex Harrison), but my ultimate choice and recommendation for horror fans is: Guillermo Del Toro’s The Orphanage. Rebekah went with The Baby’s Room (directed by Álex de la Iglesia, who recently brought us the creepy clown movie, The Last Circus). Elric chose The Entity (I think it’s because he likes to see Barbara Hershey get naked, but he cited the artistry of the filmmaking, and the suspense and the chills… Sure, Elric. He also mentioned an experimental art film homage to The Entity, entitled Outer Space). After that, we discussed the latest ghost movie to come out, The Pact, and then it was time to welcome our guest. 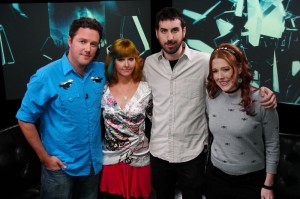 Ti West had some really interesting things to say not only about the making of his film The Innkeepers, and about his upcoming projects (including V/H/S, and The ABC’s of Death), but also about the state of filmmaking today as both a creative outlet and as a money-making endeavor. What’s more, Ti brought in a very special giveaway prize… a gatefold Blu-ray of The Innkeepers (signed)… you could win it! All you must do is go to our Facebook page, and post your own (brief) ghost story… the one we like the best gets the goodie!

Next week, be sure and tune in for our Season Finale, with Elvira: Mistress of The Dark.