Interview With John Fulton of Animal Planet’s Must Love Cats

When did you become interested in music?
John Fulton – “I started playing saxophone when I was about maybe 13 years old and I played saxophone for 7 years. Ever since I was a little kid, I was always obsessed with smooth music. You know listening to the radio driving around, Mom would always play stuff like Captain and Tennille and as a kid I was always really liking that. I don’t even know how old I was but as a little kid is when I first really got obsessed with the whole thing.”

Did you form any bands before moving to LA?
– Yeah. I was in a band called Alula in college. We were kind of a hippy band and yeah that’s about it. I was in a couple of other little small bands in high school. For the most part, I was just in a little hippy band back in the day.

What made you decide to take the plunge and move to LA?

– My friend Kurt had moved there and he was such a great bass player and such a great person that I knew that wherever he was that I had to be there. That’s the truth. I mean, I thought out that I had to get better at song writing and Kurt was a close friend of mine and, as I said, he was just so talented that wherever he was going to be that I was going to just follow him. I still feel that he’s just the greatest musician that I’ve ever met and I thought that it was a good opportunity to start something new to get into comedy. I just followed him. He moved there in February and I said ‘like it or not, Kurt, I’m coming out there!

Is this Kurt from The Fresh?
– Yeah. I just really always looked up to him as a player. He’s just so talented.

So he moved to LA. You moved to LA. How did The Fresh come about?
– He and I created The Fresh together. We just kind of wanted something that was comedy music but more melodically driven. That’s pretty much it. We came up with the idea. We were together as a duo for a couple years and then we brought in the drummer and another lead singer.

How is the writing process with The Fresh? Music first then lyrics or vice versa?
– A little of both. Yeah. We’ll also do where maybe someone comes up with an idea and we’ll open it up from there. Once in a while, someone comes in with an idea completely done and then we just do it. Like “American Beaver” or “Blue Balls” I’m pretty sure that Jack just came in with the song completely done. Then in other cases, we’ll write it all together. I guess there’s a lot of cases of how we write the songs but it’s different varieties.

I was wondering about comedy rock but I guess it’s all a case by case basis…
– Yeah. For sure. The most important thing with comedy music is shelf life. You know, you have to be aware of that. If you’re singing a song called “MySpace”‘, you’ve got to be aware that you’re probably only going to be able to sing that for a little while until it becomes completely irrelevant. A song like “Man Love” has a longer shelf life so those are the kinds of songs that we’re looking for.

Are there any talks with The Fresh about doing a second album?
– We have enough songs for a second album so we’re thinking about it. We’ll see what happens.

So the Fresh got together… you guys did “MySpace”… is that how you met Stuart Paap?
– Yeah. Yes. That’s how I became a guest on Live From The Future with Stuart Paap. He heard about the “MySpace” song and asked me to come on as a guest. And then I liked Stu so much and what Brian Gramo was doing. I just thought it was so cool and they asked me to join the show and the rest is history.

I remember during the final year of Live From The Future, there were these rumors going around that you had gotten a job at Animal Planet. I know you, Stu and Brian had to be tight-lipped about the whole thing…
– Yeah. I couldn’t say anything.

I watched The Tonight Show last night and I…
– Oh great! Thanks! I was very, very, very nervous out there. It was very surreal.

I’m really curious about the process but, of course, Jay Leno filled us all in that actually Stu auditioned for Animal Planet but you ended up with the job?
– Yeah. It was Stu’s agent that sent in his audition reel which had footage from Live From The Future and they saw me playing guitar on his audition reel and they gave both of us a call because I don’t think we knew the situation but that’s what turned out to be. Yeah.

And it hasn’t created any animosity between you and Stu…
– Oh no. Stu and I are even closer now. Stu couldn’t be happier for me. Stu and I are such good friends. He’s an absolute mentor to me. The preparation that I got on those three years with Live From The Future were the most important years of my life. They really are. I mean, the show that I did, I wouldn’t be able to do these “kitty diddies” if it weren’t for Stu and Brian. Bottom Line. Done. If it wasn’t for Brian Gramo, I just wouldn’t be here. There’s no way around that. The same with Stu. If he wasn’t here, I wouldn’t be here. Sometimes you can say that and it’s not true but in this situation… those guys… doing that show every week and having to write 10, sometimes 15 songs an episode and just the drive to work. Stu would pick me up and just give me so much invaluable information. I think you never know how these things are going to happen and he’s very happy for me and there’s just no tension between us. I called him and said “You know, I gotta tell this story on Leno and I hope you’re cool with it.” and he’s like “are you kidding me? it’s a great story. If it weren’t for my reel, you wouldn’t be on the show.” He’s really been amazing and I owe a lot of my career to Stu, Brian and this dude, Mike McCarthy, who gave me my first chance to do open-mic and learn how to perform in front of people. And The Fresh. I owe a lot to the band. Doing Live From The Future is one of the best things I ever did. I didn’t get paid one dollar and I never wanted to. It was amazing. Gramo is one of the hardest working people I’ve ever met. He’s not only humble but he puts so much into doing such a good job. Brian’s attention to detail on a large scale is absolutely astonishing. I’ve seen that kid in a room full of fifty people and he absolutely has full command on what every person is doing. It’s the mark of an amazing producer.

You got the job because they saw you singing on theStream.tv so did they say we want you singing the theme song and singing a lot in the show?

– Yeah. They did. They said to try and do as much music as you can. The second song I wrote was the theme song and they really liked it so I got lucky there. I don’t think anyone knew how many songs I would be singing. Including instrumentals, I wrote 72 songs for Must Love Cats. That was exciting that they really wanted to take it in a musical direction. I think that’s why Stu was so cool with it because he was like “You know what? They were looking for a host that does the guitar thing so that’s what it is.”

How long were you filming? How long did this road trip take?
– It took about 100 days all together. I did about 70 days in a row. I did about 15 days and then we took a break and then we did 70 and then another 12 days. About 3 and a half months to do 6 episodes. I think we did about 40 different cities.

Was this Summer 2010?
– This started in January of ’10. Yeah. I got the audition call in June ’09. It took a very long time for the audition process. We shot the pilot in January and then from there, when the show got picked up in May, we did about two or three months and we finished in August.

Man. Jim Davis, the creator of Garfield… have you loved Garfield as long as I have? [laughs] – I have! [laughs] I grew up with him. Man. Jim Davis. What a great guy he is. He was awesome to meet. Singing to Garfield was really fun. I never sang to a cartoon before so that was great and Jim couldn’t have been cooler and everybody that is part of it are just awesome.

I was a little confused. Was that Jim’s house or like a ‘Skywalker Ranch of Garfield’ deal?
– Exactly. Yeah. Paws Incorporated is his work. His house is actually right behind there but we didn’t film his house. He’s got a beautiful house. Life’s all good for Jimmy Davis. You forget how big Garfield is. Some people don’t read the paper every day. They don’t see the comic. He’s amazing. He was really friendly.

Did The Tonight Show approach you or did your agent go to The Tonight Show?
– A little of both. My publicist sends out things to the networks and they see what kind of bite they can get and Jay bit on that one. The producer over there, this guy Steve, was amazing. He really came to bat for me and he really fought for me to get on the show. It’s amazing. It was really a surreal experience.

Where did the idea of singing to Christina Applegate’s cat come from?
– Where did that come from? I think Steve. Steve and I did a lot of brainstorming on how the interview was going to go and I don’t know… I think that was his idea. “maybe you could sing a song to Christina” …I think originally I was going to sing a song to Jay but we changed that and he wanted Christina because it brought everybody into the mix. You know? That’s kind of how that went and that was really fun. It was pretty nerve-racking considering that I had to make up a lot on the spot.

Must Love Cats airs Saturdays at 8pm on Animal Planet

For more information and videos of John click here

Live From The Future’s complete archives are available here

Live! From the Future... Episodes 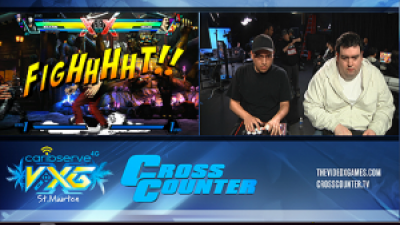 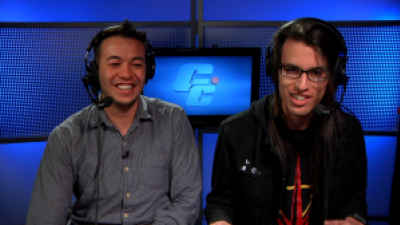 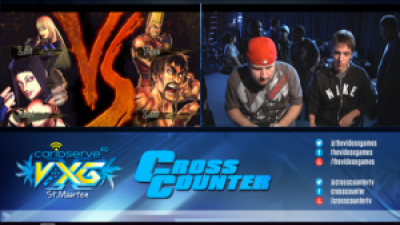 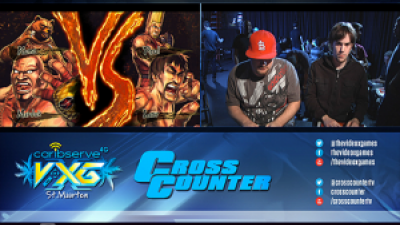 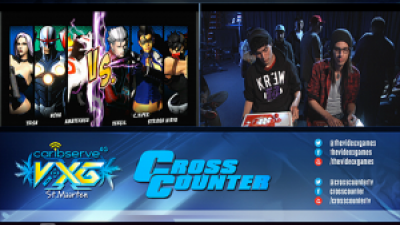 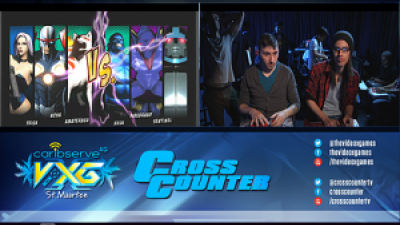 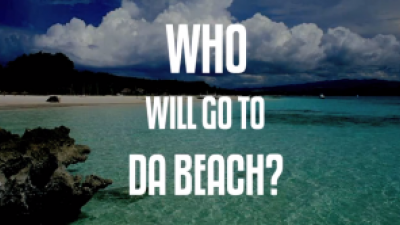 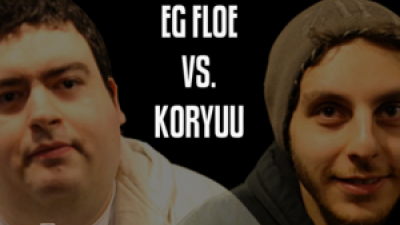 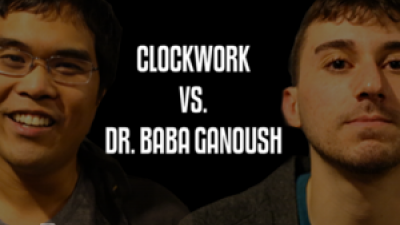 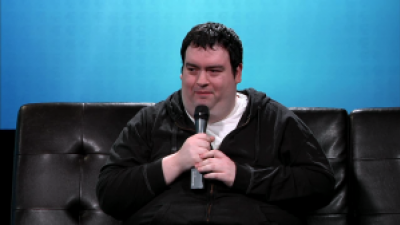