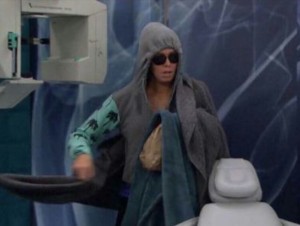 The feeds are spicing up! Two nights ago, all the houseguests met in the HoH room while Audrey was in Diary Room.

The houseguests exposed Audrey’s lies and some alliances after they  had a fun night  with ice cream. Audrey wasn’t out of DR for 4hrs or so. Rumors of Self-Evicting ran wild around the Big Brother house. She did not self evict however, the POV Ceremony was delayed because she won’t wake up and get ready. All others houseguest are waiting on her.

Vanessa used her POV on Jason and Shelli put up Audrey. As of now,  everyone is voting out Audrey on Thursday. (Austin is being silly and wants to vote out Jason this week (not possible). Thankfully, JohnnyMac knows he’s safe.

Meanwhile, Audrey was in the DR for so long that twitter starting trending this hashtag, #WhenAudreyWentIntoTheDR.

After about 5hrs, Audrey went to the Have Not Room (dropped what looked like vials of Rx)  and went back to bed. Then the Fishes came on.

They had the Veto meeting without Audrey (empty chair) and Audrey was put up with John, (this only happened one other time when Jocasta when she was sick too).
JohnnyMac joked saying he can’t be HoH as he’s made a Deal with all 11 remaining HGs to keep them safe next week, so he wouldn’t have anyone to nominate. lol.

Stay tuned….this summer is getting crazy inside the Big Brother house.